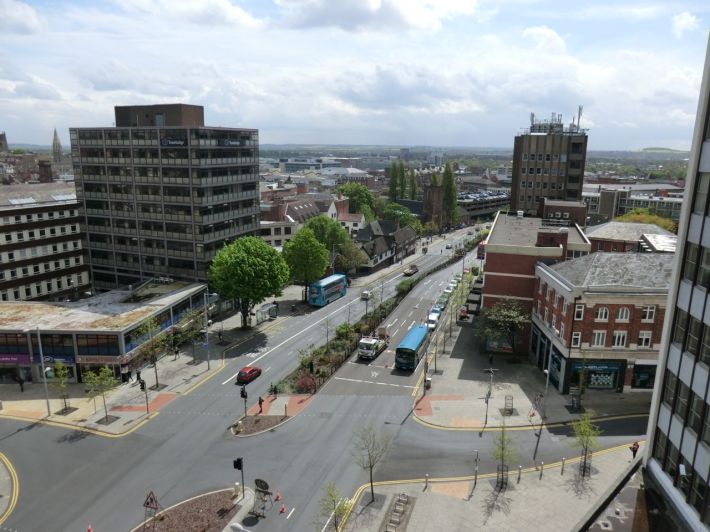 I’m not really sure why, but I decided to change my habits today. It’s a day off and I was at a lose end, so decided to make it a “mooch day”. Ordinarily, this would involve public transport and, as likely as not, a public house or two. This morning, however, I developed an irrational aversion to catching the bus. I think I basically decided it would take too long, be too expensive and be a not particularly pleasant experience. You know, all the usual reasons people give for not going on the bus.

So I drove to Nottingham.

Sure enough, I was entering the city centre of Nottingham at about the same time the bus would have got me to Derby. So far, so much quicker. Except that Nottingham City Council, in their infinite wisdom, chose a weekday morning to cone-off the outside lane of Maid Marion Way to weed the central reservation. Yes, I know it has to be done some time (* see footnote)  but given the immense congestion it was causing, and consequent cost to GB PLC, wouldn’t have been more cost effective to pay the workers unsociable hours and do it in the evening?

Moving on (eventually), I needed somewhere to park. Normally if I was driving into I’d come into the city from the A52, a route which naturally leads to the car park next to the Crowne Plaza at Wollaton Street. However, today I came straight from home so approached from the A453. Hence I took a spur-of-the-moment decision to turn off Maid Marion Way and park in the NCP St. James Street Car Park. Bang – there goes the bus-is-more-expensive argument.

Only as the unwary visitor to the area is committed on the in ramp to the multi-story do the good folk at NCP see fit to announce their scale of charges. First off there’s a minimum charge of £2 for 30 min, so exiting straightway and finding somewhere else becomes pointless. For a reasonable mooch period of four hours, the charge is an eye-popping £9.20. Lest the bright lights of the city of Nottingham prove such a draw that a stay of over four hours is contemplated, then get ready to stump-up £12.80. Needless to say, the machine takes plastic! 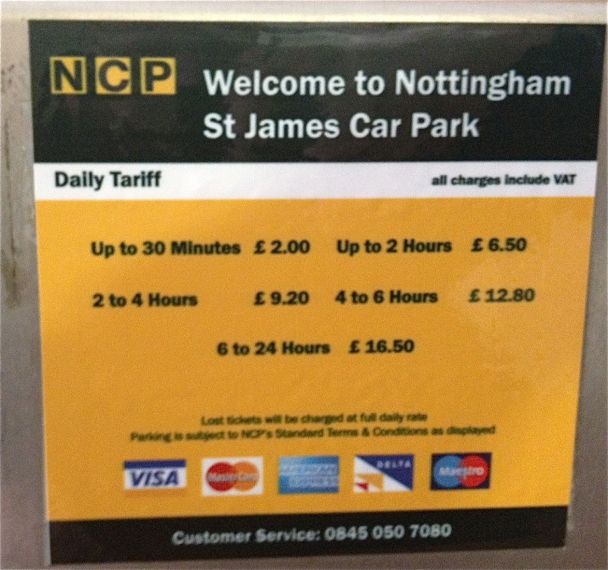 How I wish I’d availed myself of the services of Parkopedia before I entered the city limits. As I was to later discover, had I followed my first instinct and gone round to Upper Parliament Street, I’d have saved myself a few quid. Tish.

Exorbitant parking wouldn’t, of itself, be much to complain – or even remark – about. However, I was struck by a pervading feature of modern city life as I mooched the streets of Nottingham: Even Clumber Street, the street reputed to have the highest density of footfall in Europe, has empty shop fronts. If a retail business can’t survive here, it is no wonder that slightly less popular (but well trafficked by pedestrians) thoroughfares such as Market Street have rows of empty premises.

Having recently watched and enjoyed Charles Furguson’s Inside Job, which clinically deconstructs the 2008 Global Banking scandal (with only the barest of inevitable anti-capitalist agenda), I think I have a basic understanding of why money is tight. That said, this is just one of a depressingly large number of examples of just how that corporate greed is killing communities. Each of these empty shops represents a loss of income to the local economy. Theoretically someone will be paying business rates on these premises, but I bet the reality is different. Quite apart from that, rows of empty shops are indicative go a downward spiral of fewer people in the area leading, eventually, to more decay. Put simply – Where Has All The Money Gone?

But is it all the fault of the bankers and their reluctance to lend money to keep businesses afloat? I wonder if a parking charge of nearly £10 for a usable amount of time isn’t at least part of the reason people aren’t visiting city centres to spend what “spare” money they have?

Think I’ll go on the bus next time.

* Actually – Does it? In this time of financial constrain (the theme of this post, when I get to the point!), do central reservations really need weeding?

This Space For Hire?

You'll probably already get this, but what's going on here is very much an experiment. Not only this "blogging" lark, but more especially setting up how the Word Press site will look. For the record, as of now, Word Press gets a big A+ from me....